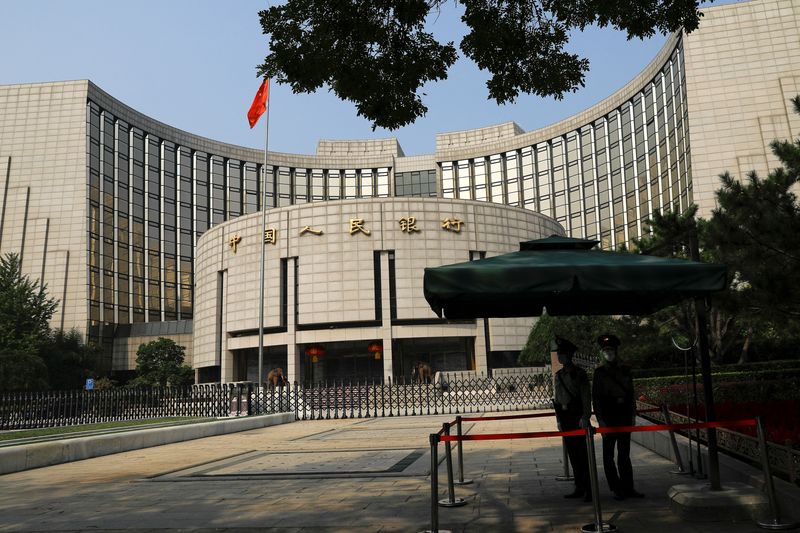 Key rates dropped, with the volume-weighted average price of the overnight repo traded in the interbank market falling below the threshold of 1% for the first time in two months to 0.8532%, its lowest since Jan. 6 last year.

By midday, the overnight repo traded at 0.8716%, down about 21 basis points from the previous close, and the seven-day repo stood at 1.6361%, more than 36 basis points lower than the reverse repo rate charged by the People's Bank of China (PBOC).

Traders said declines in interbank rates were largely due to looser cash conditions after financial institutions cut leverage this month.

"After crazy bond redemptions last week, everyone has a lot of cash in hand," said a trader at a fund.

While most other major economies are raising interest rates to tame inflation, Beijing is focusing more on propping up a slowing economy by keeping money rates low.

And many market participants had taken advantage of the low repo rates to fund leveraged trades in bonds, traders said.

The government bond market had its worst single-day selloffs in two years last week, as risk appetite swelled amid rising expectations for a gradual easing of stringent COVID-19 curbs and official moves to support the troubled property sector.

Sentiment steadied this week, as the PBOC drained 170 billion yuan on a net basis via seven-day reverse repos earlier in the session. [CN/MMT]

The moves came after the central bank drained short-term liquidity from the banking system for the first time in eight days on Monday.

However, markets are divided whether the falls in the money rates would be sustainable.

"We are more inclined to see the recent softening in CNY rates as short-lived," said Frances Cheung, rates strategist at OCBC Bank.

"And we do not expect rates to go back to the lows seen in September and October, given China's more supportive economic policy, yet a more balanced monetary policy stance."

"While markets are certainly keen to forward price, new COVID cases are elevated and climbing, which should bring back into focus the intensifying risks of lockdowns," DBS rates strategist Duncan Tan said in a note.

Beijing, the capital, shut parks, shopping malls and museums on Tuesday while more cities resumed mass COVID testing, in the fight on a fresh nationwide spike in infections that has deepened concerns about its economy.

There may not be more pro-growth policy measures in the near term, Tan added, following efforts to spur rates to push higher, saying, "Rates could continue to pull back."