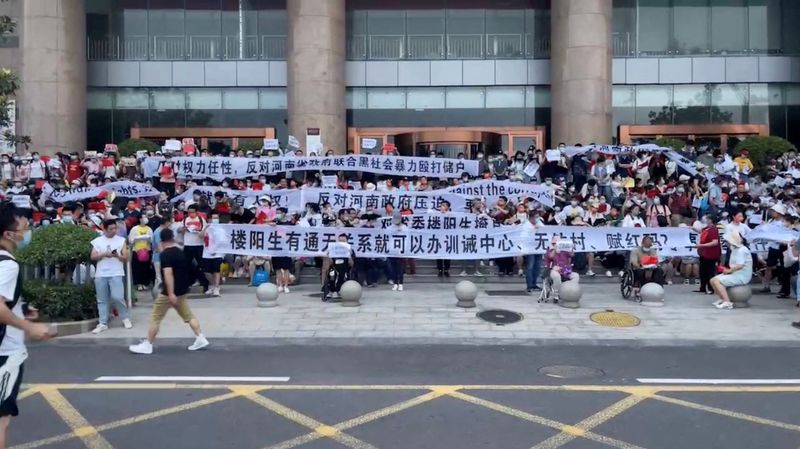 © Reuters. Demonstrators hold banners during a protest over the freezing of deposits by rural-based banks, outside a People's Bank of China building in Zhengzhou, Henan province, China July 10, 2022, in this screengrab taken from video obtained by Reuters.

BEIJING (Reuters) - Authorities scrambling to contain the damage from a rural banking scandal in central China's Henan province said on Friday that more depositors will be repaid, while three regulators were put under investigation.

Deposits worth at least $1.5 billion at a handful of small lenders have been frozen since April in what authorities have said was a complex scam, and which sparked high-profile protests amid renewed concerns about the 4,000 small banks across China.

Authorities in Anhui province's Bengbu city issued a similar statement, saying they will start repaying clients at a bank there from the same date.

Separately, the China Banking and Insurance Regulatory Commission (CBIRC) said in a statement that two officials, one from CBIRC's Henan provincial office and the other from CBIRC's Kaifeng sub-office, were under investigation due to unspecified suspected violations of the law.

Also on Friday, the Central Commission for Discipline Inspection in Henan province said an official overseeing financial stability at the Chinese central bank's branch in provincial capital Zhengzhou was under investigation for suspected serious disciplinary violation.