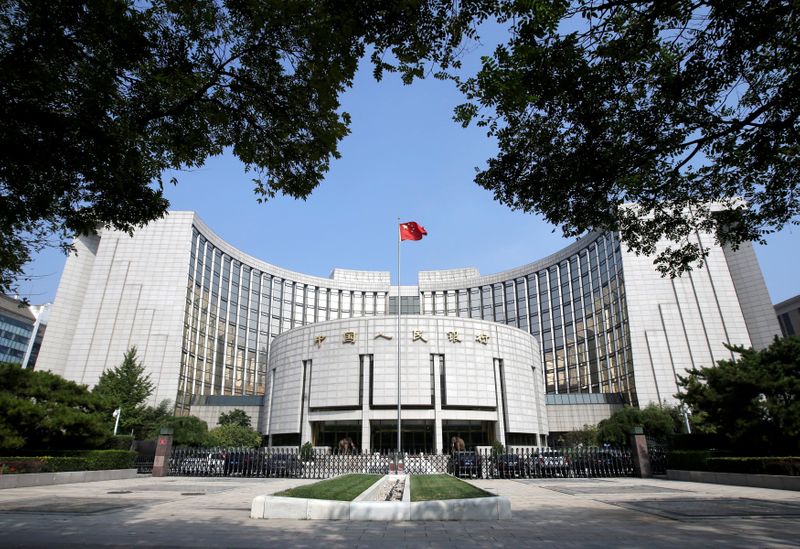 SHANGHAI (Reuters) - China will likely keep its benchmark lending rate unchanged at its July fixing on Tuesday, a small majority of respondents to a Reuters survey believe, but there are growing expectations for a cut after a surprise lowering of bank reserve requirements.

Eleven traders and analysts, or 52.4% of 21 participants, in the snap poll predicted no change in either the one-year Loan Prime Rate (LPR) or the five-year tenor.

The remaining 10 respondents expect a cut to the one-year LPR. Nine participants forecast a marginal cut of 5 basis points, and one sees a 10 bp reduction.

The mixed expectations come after China's central bank lowered the amount of cash that banks must hold as reserves, releasing around 1 trillion yuan ($154.35 billion) in long-term liquidity to underpin its post-COVID economic recovery that was starting to lose momentum.

However, the People's Bank of China (PBOC) kept borrowing costs of medium-term lending facility (MLF), which serves as a guide for the LPR, unchanged at its latest operation last week, when it partially rolled over maturing loans.

"Although the PBOC recognises that downward pressure on growth is likely to rise in H2, it has been quite determined in containing financing for the property sector, which is a key signature of Beijing's 'dual circulation' strategy," said Lu Ting, chief China economist at Nomura. Lu expects the LPR will likely remain unchanged this month.

China's economy grew slightly more slowly than expected in the second quarter, weighed down by higher raw material costs and new COVID-19 outbreaks, as expectations build that policymakers may have to do more to support the recovery.

"The 1Y LPR is likely to fall by 5 bps on July 20 and another 5 bps before year-end due to RRR cuts and reduced interest rate ceilings for term deposits longer than one year," Li Wei, senior China economist at Standard Chartered (OTC:SCBFF), said in a note.

The LPR is a lending reference rate set monthly by 18 banks.

All 21 responses in the survey were collected from selected participants on a private messaging platform.