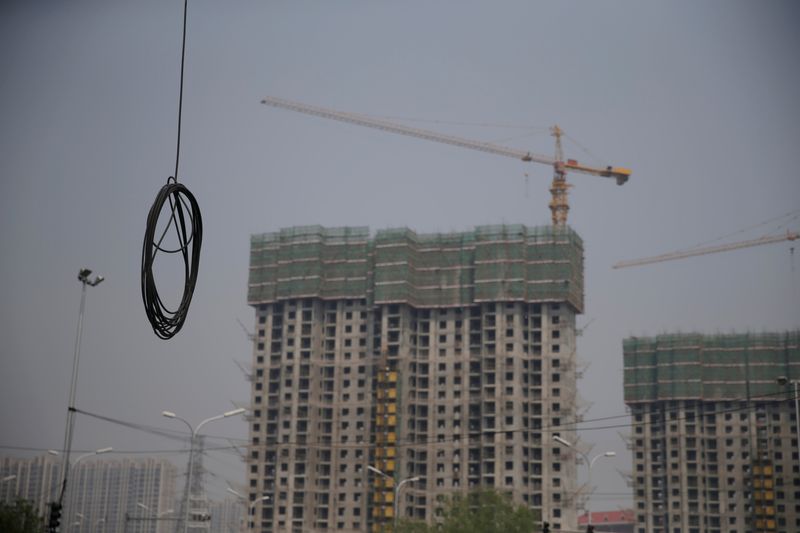 © Reuters. A cable is seen near residential buildings under construction in Beijing, China April 20, 2018. REUTERS/Jason Lee

BEIJING (Reuters) -Chinese financial authorities on Sunday allowed a further cut in mortgage loan interest rates for some home buyers, in another push to prop up its property market and revive a flagging engine of the world's second-largest economy.

For purchases of first homes, commercial banks can reduce the lower limit of interest rates on home loans by 20 basis points, based on the corresponding tenor of benchmark Loan Prime Rates (LPRs), the People's Bank of China (PBOC) and China's Banking and Insurance Regulatory Commission said in a statement.

The cut aims to support demand and promote stable and healthy development of the real estate market, the statement said.

In its monthly fixing in April, the PBOC kept its one-year LPR unchanged at 3.70% and the five-year LPR, typically used as a benchmark for mortgage loans, steady at 4.60%.

Banks in many cities cut mortgage rates in the first quarter following calls from authorities to support buyer sentiment in a market rocked by a liquidity crunch and troubled developers last year, and now by nationwide COVID-19 outbreaks.

The latest loan guidance came after central bank data on Friday showed new bank loans plunged to their lowest in more than four years in April, as varying degrees of COVID lockdowns in dozens of cities curbed lending, with mortgage loans contracting.

To free up more funds for lending, the PBOC on April 25 reduced the amount of cash that lenders must set aside as reserves. More modest easing measures are expected as authorities vow to roll out more policies to support the broader economy.

But despite the easier mortgage loan guidance, much depends on the banks.

"During lockdowns, banks tend to be more risk-averse," said Iris Pang, senior Greater China economist at ING, wrote in a note on Friday after the central bank data.

"They have been told to keep past-due loans on their books. Under these circumstances, banks have become unwilling to create new loans, as that would mean taking on more risk by getting new loans and then waiting for them to become past due if lockdowns continue."