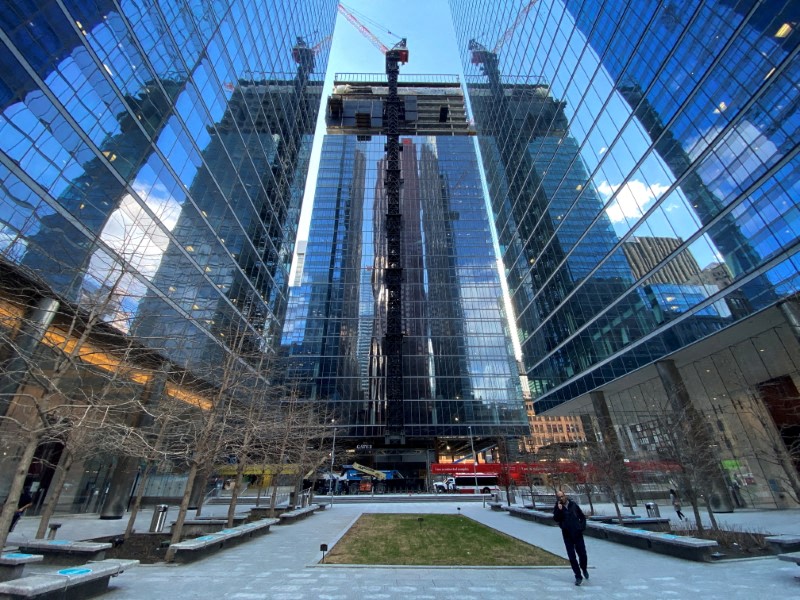 OTTAWA (Reuters) -Canada's economy likely expanded for the sixth consecutive month in November, after matching expectations in October, official data showed on Thursday, implying the Bank of Canada will stay the course on interest rate hikes despite the rise of the Omicron variant.

Real gross domestic product rose 0.8% in October from September, in line with analyst estimates, while November GDP was most likely up 0.3%, Statistics Canada said. It also revised up September's GDP gain to 0.2% from 0.1%.

With November's rise, which is a preliminary estimate, Canada's economy is just 0.1% below pre-pandemic levels, Statscan said. The gains also imply fourth-quarter GDP will be stronger than Bank of Canada forecasts, analysts said.

That "means the Bank may not be too concerned about the renewed disruption from the deteriorating coronavirus situation," Stephen Brown, senior Canada economist with Capital Economics, said in a note.

Several provinces have imposed fresh restrictions and temporarily shut some businesses amid soaring cases of COVID-19.

Brown said the impact of those measures would be temporary, and "may not delay" Bank of Canada tightening plans.

The bank this month said slack in the economy had substantially diminished, setting the stage for it to begin hiking rates from historic lows.

Money markets see a first hike in March 2022, though bets are increasing on an earlier move. [BOCWATCH]

The October GDP gain was broad-based and included a rebound in manufacturing activity, which had been hit by supply chain bottlenecks and semiconductor chip shortages.

The November gain was driven by growth in hard-hit service sectors. There was no mention in the release of the impact of November floods in British Columbia, which crippled road and rail access to Canada's largest port.

"The advance estimate for November ... while a little disappointing relative to industry data received in the past week, is still a solid result given the flooding seen in B.C.," Andrew Grantham, senior economist at CIBC Capital Markets, said in a note.