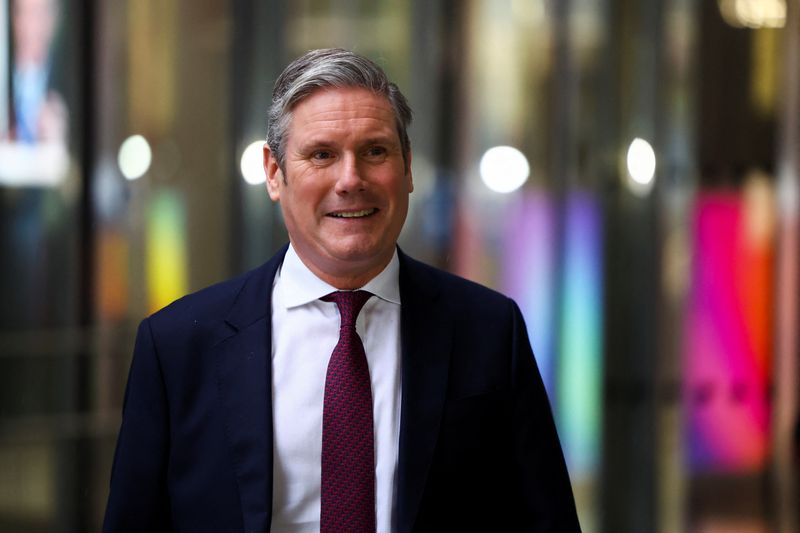 Some businesses have been pushing the government to ease immigration rules, especially from the European Union, to fill job vacancies and boost flagging growth, which they say has been worsened by the post-Brexit end of free movement from the bloc.

Britain's exit from the EU was sold by its backers, including former prime minister Boris Johnson, as a way to "take back control" of immigration rates, which some voters said was squeezing access to both jobs and welfare benefits.

Starmer has repeatedly said that Labour, if it forms a government at the next election due before the beginning of 2025, will not support open borders to immigration and would introduce a points-based system - a policy all but the same as that adopted by the governing Conservative Party.

In a speech to the Confederation of British Industry (CBI) conference, Starmer doubled down on that message by telling businesses that a Labour government would work with companies to "help the British economy off its immigration dependency".

"Migration is part of our national story - always has been, always will be. And the Labour Party will never diminish the contribution it makes to the economy, to public services, to your businesses and our communities," he told the conference in the central English city of Birmingham.

"But let me tell you - the days when low pay and cheap labour are part of the British way on growth must end."

Some businesses and economists have urged the government to rebuild closer ties with Europe, and ease immigration rules, as the country heads into a recession, held back by stagnant business investment and sluggish post-Brexit trade.

Britain's economy has long relied on cheap labour, particularly since the EU expanded to take on new members from eastern Europe.

That has prompted some lawmakers to accuse business owners of using low-skilled workers instead of investing in automation - Britain has deployed less than a tenth of the robots that are operating in Germany - and its rate of productivity lags that of most advanced nations.

On Monday, CBI Director General Tony Danker said labour shortages could be addressed with a better immigration system. The head of the Recruitment and Employment Confederation trade body said companies knew wages needed to rise, but they needed economic growth to make that happen.

Despite the pressures, Sunak has pushed back against those calls, saying he wanted to work on building trust in Britain's migration system, one that he hoped would be a beacon for talent around the world.

Starmer said he wanted a "new partnership" with business, one in which Labour would be "pragmatic" on the shortage of people by not ignoring the need for skilled people to come to Britain.

"But I want to be clear here: with my Labour government any movement in our point-based migration system, whether via the skilled occupation route, or the shortage worker list, will come with new conditions for business," he said.

He said he would require businesses to have plans for more training, better pay and conditions and the investment in new technology.

"But our common goal must be to help the British economy off its immigration dependency," he said.