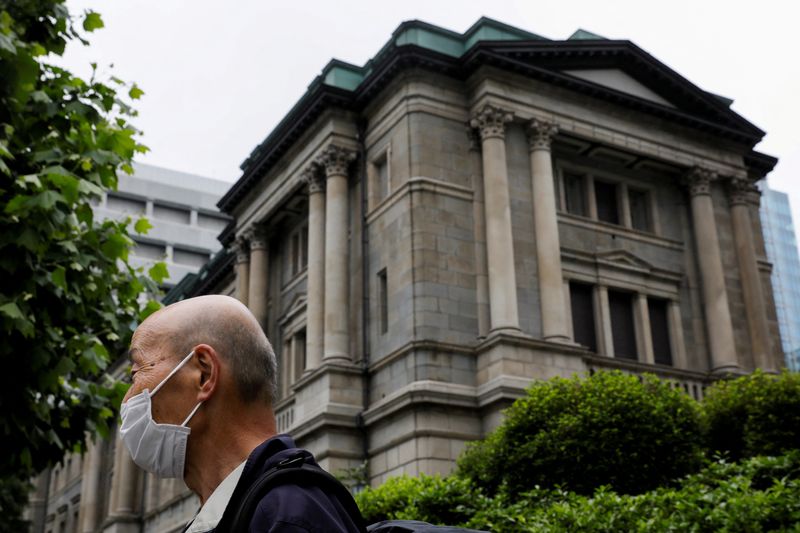 TOKYO (Reuters) - The Bank of Japan is likely to keep interest rates ultra-low on Friday, unfazed by a relentless fall in the yen that is boosting import costs and shows little sign of abating while other central banks around the world withdraw monetary stimulus.

The yen's weakness, once welcomed for the boost it gives to the export-reliant economy, has become a source of concern for Japanese policymakers as it inflates already-rising import costs and inflicts pain on households.

The deepening dilemma for the central bank was evident last week when BOJ Governor Haruhiko Kuroda faced a storm of criticism on social media for saying that households were becoming more accepting of higher prices.

He was forced to retract that comment, and backtracked on Monday from his long-held view that a weak yen was good for the economy.

Despite grumbling over the yen's weakness, however, the BOJ is likely to maintain ultra-low interest rates on the view that hiking rates now would do more harm than good by cooling a fragile economy, said three sources familiar with the central bank's thinking.

"The BOJ does not target exchange rates in guiding monetary policy," one of the sources said.

"What's important now is to support the economy with ultra-loose policy," the source said. That view was echoed by the other two sources.

At a two-day meeting that ends on Friday, the BOJ is expected to keep unchanged both its -0.1% short-term rate target and its 0% cap for 10-year government bond yields.

The BOJ is caught in a fresh conundrum. While core consumer inflation exceeded its 2% target in April for the first time in seven years, the rise is driven mostly by fuel and food costs.

Wary that such cost-push inflation will hurt consumption, the BOJ has repeatedly stressed its resolve to keep monetary policy ultra-loose until wage growth intensifies.

But the BOJ's dovish stance has driven down the yen, which weakened to 135.22 per dollar on Monday, the lowest since 1998. That is piling pain onto households by pushing up their cost of living.

While the BOJ could raise rates as a last resort if the yen spirals into free-fall, analysts doubt whether such a move could reverse a broad, strong-dollar trend driven by the U.S. Federal Reserve's aggressive rate hike plans.

"But the environment surrounding the BOJ is changing rapidly," she said. "If the yen slides below 140 or 145 to the dollar, the BOJ may be forced to raise its yield target."