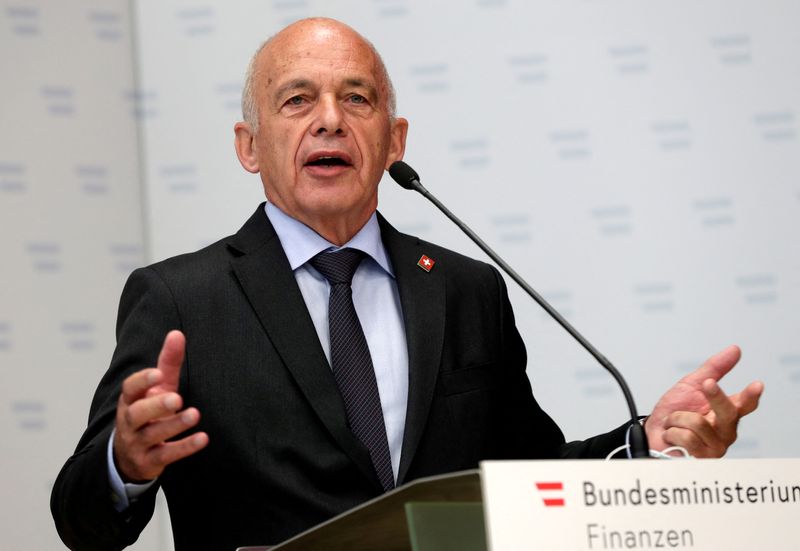 ZURICH (Reuters) -Switzerland will implement from 2024 the minimum tax rate for large multinational companies agreed last year by the OECD and G20 member states, the finance ministry said on Thursday.

A temporary ordinance will ensure the minimum tax rate of 15% for companies with turnover of more than 750 million euros ($860 million) comes into force on Jan. 1, 2024, Finance Minister Ueli Maurer said, adding a law would subsequently be enacted to amend the constitution.

He said around 200 Swiss companies and around 2,000 Swiss subsidiaries of foreign groups would be affected by the move, which he said provided legal certainty and ensured tax revenue remained in Switzerland.

"If 15% is going to be levied, then we want to levy that in Switzerland," he told a news conference in Bern, adding final details were still being worked out with the Organization for Economic Cooperation and Development (OECD) for the biggest global companies.

Maurer said it was too early to estimate how much more tax revenue Swiss cantons would collect under the scheme, or to say what sweeteners may be on offer to make sure the traditionally low-tax country remained an international hub for business.

A group of 137 countries in October set the minimum global tax rate of 15% for big companies and sought to make it harder for them to avoid taxation in a landmark deal.

Switzerland had been in the international firing line for years because cantons had a special tax status for foreign companies that meant some paid virtually no tax over an effective federal tax of 7.8%.

But voters in 2019 approved a shake-up of the corporate tax system, heading off what Maurer had called an existential threat to the country's role as a business hub.

A new constitutional amendment would also face a referendum, but the temporary ordinance would let Switzerland adhere to the new global regime in the meantime.