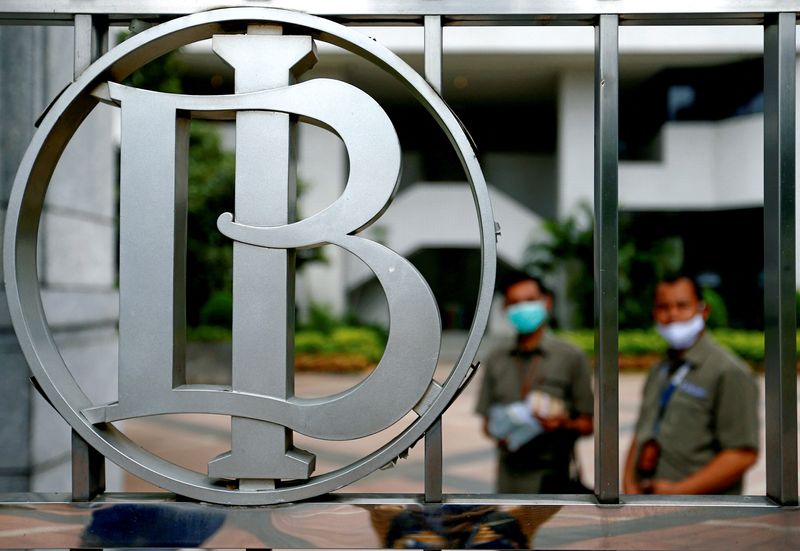 BENGALURU (Reuters) -Bank Indonesia will leave its key interest rate steady at 3.50% on Thursday but over one-quarter of economists in a Reuters poll expect a rate rise to stem imported inflation from a weak rupiah currency as the U.S. Federal Reserve tightens aggressively.

Indonesia's central bank is one of a few major Asian central banks that has not raised rates from a pandemic record low since inflation has held within its target range of 2%-4%.

But a 75-basis-point Fed rate rise last week and the prospect of more aggressive moves in the coming months sent the rupiah tumbling by 2%, its worst weekly performance in nearly three years.

Still, 23 of 32 economists in the latest poll taken June 13-20, predicted the central bank will keep its benchmark seven-day reverse repurchase rate at a record low of 3.50% at its June 22-23 meeting.

"Bank Indonesia's policy dashboard is likely to broaden from being focused on domestic growth and inflation, to include financial stability and outflow risks, paving the way for a start to the hiking cycle from July," said Radhika Rao, senior economist at DBS Bank.

"Unless the current pressure on the IDR abates in the lead-up to BI's meeting, the more prudent move is a rate hike, or at least clear signals that a rate lift-off is near," said Krystal Tan, economist at ANZ, who forecasts a 25 basis point rise.

"The absence of a change in stance could risk BI being perceived as the standout regional laggard and intensify pressure on the IDR."

The currency of Southeast Asia's largest economy has fallen nearly 4% this year, half of that last week, raising concerns about imported inflation in a country of over 270 million people.

Until recently, price pressures have been relatively tame. But soaring global energy and food prices have pushed inflation close to the upper band of the BI's target, hitting 3.55% in May, the highest in over four years.

Governor Perry Warjiyo acknowledged at the May policy meeting that inflation will rise above the target band this year but predicted it will cool next year.

"The upward trajectory is likely to remain because of other factors including higher food price inflation and the pass-through from surging input costs and higher minimum wages," noted economists at Nomura, who expect inflation to rise above 4% by the end of Q3.

Poll medians showed BI, which meets monthly, will kick off its rate hiking cycle next quarter, delivering a total of 50 basis points by the end of the third quarter to 4.00%.

Of those who are expecting the first hike in Q3, 7 of 17 economists predicted BI to raise by 25 basis points, 8 predicted 50 basis points while 2 expected 75.