Australians kept shopping in Q2, but wallets may now be closing 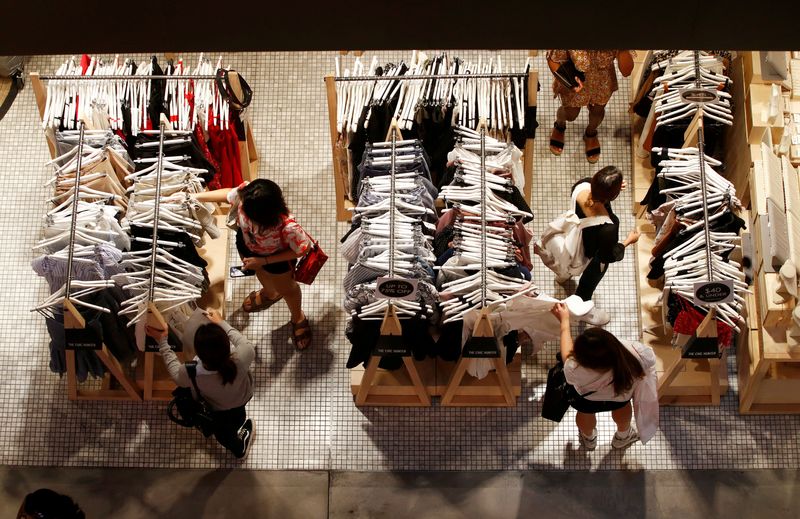 SYDNEY (Reuters) - Australian retail sales posted a solid rise in real terms last quarter even as swelling prices ate up more of the consumer dollar, though there are signs that higher borrowing costs are finally turning the tide on spending.

Data from the Australian Bureau of Statistics on Wednesday showed inflation-adjusted retail sales had risen 1.4% in the June quarter to A$94.3 billion ($65.1 billion). That topped market forecasts of a 1.2% increase and will make a valuable contribution to economic growth.

Spending was strongest in eating out, continuing a recovery since the easing of coronavirus restrictions, while sales of household goods and food fell back.

The upbeat result will offer some comfort to the Reserve Bank of Australia (RBA) that consumers can withstand its aggressive tightening of monetary policy, though more timely data suggests some people are cutting back on non-essentials.

The central bank lifted interest rates by another 50 basis points to 1.85% on Tuesday and flagged more to come, but also acknowledged that risks to economic growth were mounting.

Markets responded by lengthening the odds on a further half-point hike in September, slightly favouring a move to 2.10%, though they still see a peak around 3.30% to 3.40% in March or April.

Wednesday's retail data underlined the challenge the RBA faces on inflation: prices jumped 1.7%, on top of a 1.8% rise in the first quarter.

The RBA has already saddled borrowers with 175 basis points of interest rate increases since May, easily the most aggressive tightening in three decades and a burden for Australians holding a record A$2 trillion in mortgage debt.

The hikes delivered so far will add around A$560 a month in repayments to the average A$620,000 mortgage, and that is on top of surging bills for energy and food.

House prices have also jolted into reverse, with values in Sydney falling at the fastest pace in 40 years.

Harry Ottley, an economist at Commonwealth Bank of Australia (OTC:CMWAY) (CBA), noted internal data on the bank's cards showed spending on recreation, general retail, household goods and eating and drinking out had all eased over July.

"It is likely the increased cost to mortgage holders will put more downward pressure on household consumption," he said. "We are now seeing a moderation alongside other forward looking data like home prices, home lending and building approvals."

This is a major reason why CBA expects interest rates to peak around 2.60%, well short of market pricing.