As S&P 500 confirms bear market, most of its components look worse 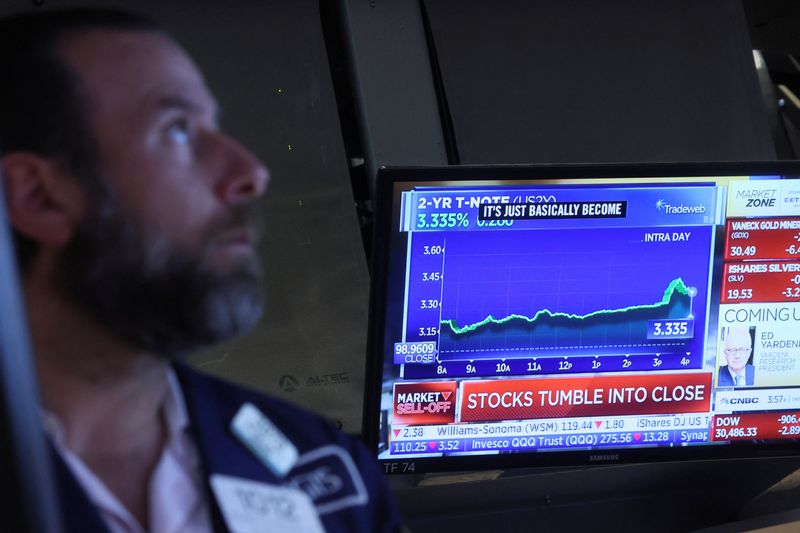 (Reuters) - While the S&P 500 confirmed on Monday that it has been in a bear market since January, many of the benchmark's components are in far worse shape following months of fear-driven selling related to rising interest rates and worries about the economy.

The S&P 500's 3.9% drop on Monday was fueled by worries that more aggressive interest rate hikes by the Federal Reserve could push the economy into a recession. The S&P 500 has now tumbled about 22% since its Jan. 3 record high close, confirming it has been in a bear market since hitting that high.

Within the S&P 500 technology sector index, 93% of stocks have fallen 20% or more from their highs, including PayPal (NASDAQ:PYPL) Holdings, which has now tumbled 76% from its record high last July following a 7% drop on Monday.

Previously highly valued growth stocks have been badly punished in recent months by investors worried about the group's vulnerability to rising interest rates.

Among stocks in the S&P 500 consumer discretionary index, more than 90% are in bear markets, including Etsy (NASDAQ:ETSY), down 77% from its record high, and Carnival (NYSE:CCL) Corp, down 67% from its high. The cruise ship company's stock slumped more than 10% on Monday.

Within the communication services sector index, Facebook-owner Meta Platforms has slumped 57% from its 2021 high, and Walt Disney (NYSE:DIS) Co has fallen 49%, including a drop of more than 3% on Monday.

With investors dumping streaming services as competition deepens, Netflix (NASDAQ:NFLX) has been the S&P 500's worst performer in 2022, down 72% year to date.

Tesla, which last year soared to become one of Wall Street's most valuable companies, has now tumbled 39% in 2022 after falling 7.1% on Monday.

While investors are laser-focused on the central bank's next interest rate announcement on Wednesday and on worries about a potential recession, the stock market's recent tumble has cooled valuations that in 2020 reached their highest level since the dot-com era. The S&P 500 is now priced at about 17 times expected earnings, which is in line with its average forward PE over the past 10 years, according to Refinitiv data.