As Britain shuts down for Queen's funeral, thousands face disruption 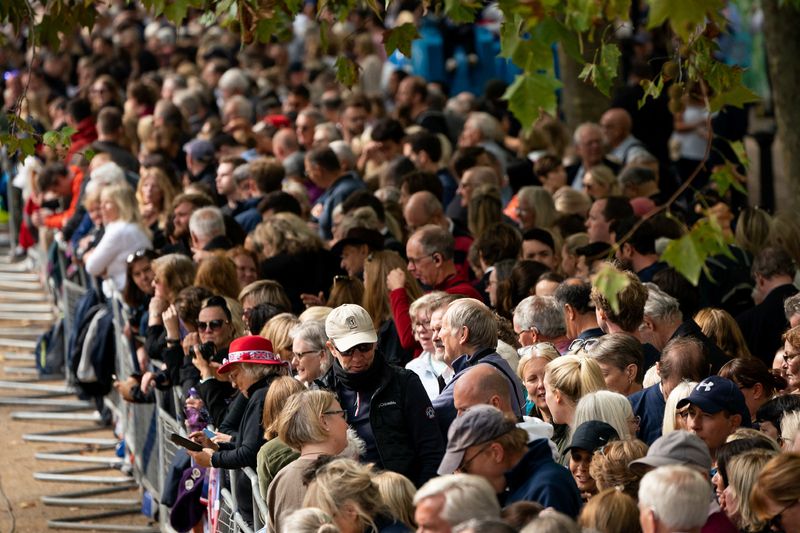 By Sachin Ravikumar and Humza Jilani

LONDON (Reuters) - While Queen Elizabeth's funeral on Monday will be observed across Britain, thousands of people face cancelled doctor appointments, closed food banks and shut supermarkets because of a surprise national holiday.

Many patients have been left frustrated after being told that National Health Service (NHS) appointments they had waited months to secure were suddenly cancelled.

"For patients who may have been waiting up to two years for elective surgery or appointments — if they are then cancelled on the 19th, this will be incredibly distressing," Ellen Welch, co-chair of doctors' lobby DAUK, told Reuters.

"As frontline NHS staff, DAUK are left wondering if the decisionmakers in government really understand how their decisions play out on the ground," Welch said.

Britain's state-run NHS is already facing its worst ever staffing crisis and has more than 6 million people on waiting lists for hospital treatment. It handles an average 888,000 general practice appointments each day, according to Reuters calculations from data from the last six months.

There are also concerns about the NHS resources needed to rebook appointments and doctors having to make childcare arrangements at short notice.

"The issue is the short notice, really. We can always organise around planned holidays," said Helen Salisbury, a doctor and Oxford University professor.

"If you think about people who are waiting for cancer diagnostics, or chemotherapy, it's really difficult to know how they're going to proceed."

As with any national holiday, NHS staff will ensure urgent and emergency services are available, a spokesperson said.

The NHS will "continue to operate and operate at scale on that day," a spokesman for Prime Minister Liz Truss said.

"Obviously individual trusts are monitoring for any possible impacts due to postponements."

Other organisations have faced criticism for their decisions to suspend services as a mark of respect.

"The country's gone mad...British Cycling strongly recommends that nobody rides a bike while the Queen's funeral is taking place," musician John Spiers wrote on Twitter (NYSE:TWTR).

Center Parcs, which operates holiday villages, abruptly advised guests in the middle of their vacations to leave on Monday and come back the next day as its staff watches the funeral.

It later backtracked and allowed guests to stay in its villages after facing an outcry, media reports said.

The government has said there is no obligation to cancel or postpone events or close venues and left such decisions to individual organisations.

A range of other economic activity is also likely to grind to a halt on the day of the Queen's funeral.

Many supermarkets, which usually operate for limited hours during other national holidays, have declared they will be closed on Monday. They include Britain's biggest retailer Tesco (OTC:TSCDY), as well as Asda, Iceland, Aldi and Poundland.

Other retailers including Primark, Ikea, Harrods and WH Smith, besides cinema operator Cineworld have also said they will be shut.

Even people hankering for a cheeseburger will have to wait. McDonald's (NYSE:MCD) said all of its restaurants in Britain would be shut until 5 p.m. on Monday. Some food banks - a lifeline for poorer housholds - have also announced closures, while several striking workers' unions have also suspended planned industrial action as a mark of respect.

Other events that were cancelled during the mourning period include London Fashion Week shows, English Premier League soccer matches and a range of other sporting fixtures.

London's Heathrow, Britain's busiest airport, said it expects changes to its operations on Monday, while warning of disruption to flights for nearly two hours on Wednesday as the Queen's coffin is carried in a procession in central London.