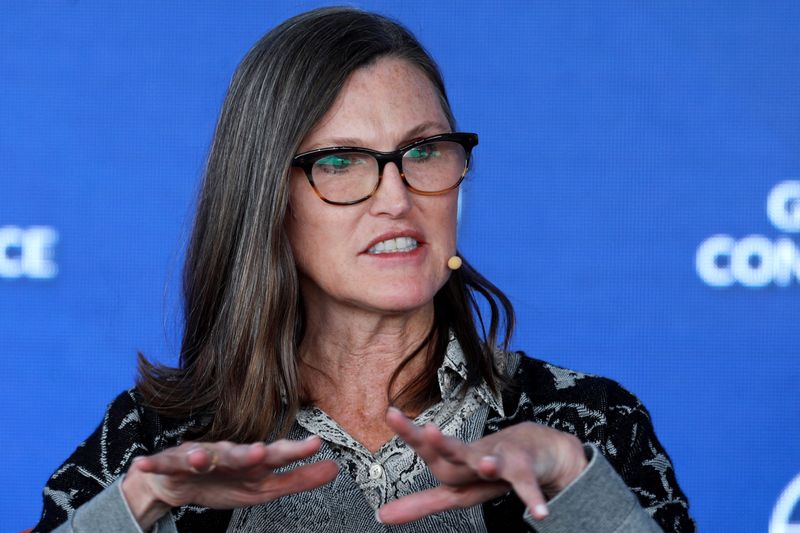 Wood, whose ARK Innovation fund sky-rocketed in 2020 during the COVID-19 pandemic but has significantly lagged the market over the last 12 months, said that historically-low consumer sentiment, rising gas prices, and accelerating technological innovation will weigh on sectors such as energy stocks that have rallied this year.

"We believe value strategies are in harm's way," Wood said. "The greater risk now more than ever is deflation."

Higher-than-expected inflation data released on Friday that showed prices rising by their fastest pace in 41 years sank U.S. stocks and bonds over the last two trading days, confirming that the benchmark S&P 500 is in a bear market. [.N]

Investors are now pricing in the increasing possibility that the Federal Reserve raises its benchmark interest rates by 75 basis points at the conclusion of its meeting on Wednesday, up from prior expectations of 50 basis points. [L1N2Y00QP]

ARK Innovation is down 61% for the year-to-date as its top holdings such as Tesla (NASDAQ:TSLA) Inc, Zoom Video Communications (NASDAQ:ZM) Inc and Roku (NASDAQ:ROKU) Inc have dropped 30% or more over that time.

The fund is down nearly 18% over the last week, driven in part by a nearly 20% decline in Coinbase (NASDAQ:COIN) Global, its fifth largest-holding, amid a significant decline in cryptocurrencies.

ARK Innovation has returned an average of minus 4.7% over the last three years, a performance that puts it in the 77th percentile among U.S. Mid-Cap Growth funds, according to Morningstar.