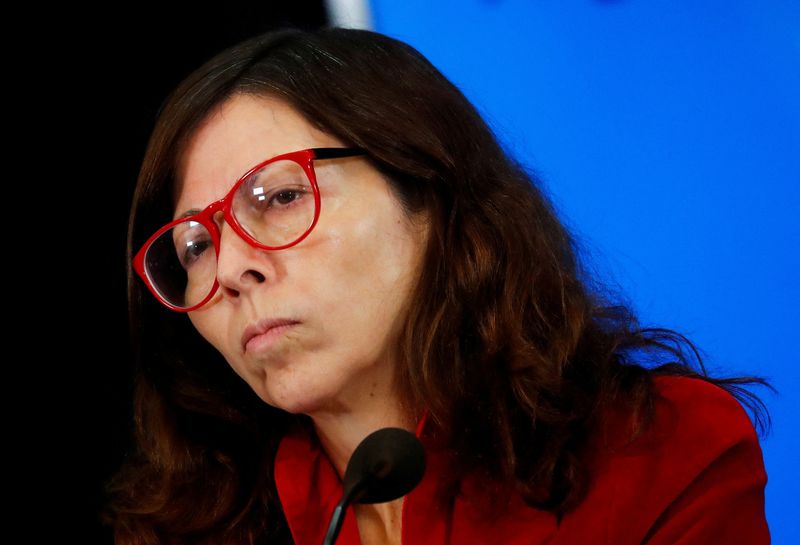 BUENOS AIRES (Reuters) - Argentina's new economy minister told a gathering of investors in the United States on Tuesday she had begun an adjustment to government spending supported by all ruling party factions, one participant told Reuters.

Economy Minister Silvina Batakis, less than one month into the job, met with investors in Washington a day after meeting with international lenders and senior U.S. economic policymakers, aiming to calm worries over the near-term prospects for Latin America's third-biggest economy.

Although an economy minister seeking to reassure nervous investors is unlikely to speak of increasing spending, the account of Tuesday's meeting did not confirm that she had referred to a downward adjustment.

Argentina is struggling with surging inflation, massive debt obligations and an ailing peso currency that last week weakened to fresh record lows against the U.S. dollar.

The participant, Adcap Grupo Financiero managing partner Javier Timerman, said Batakis had emphasized that the governing coalition's leftist and center-left factions were all on board with implementing the spending adjustment.

"Batakis was very open," said Timerman. "She said she wanted to rebuild the relationship with Wall Street. She recognized that the relationship before wasn't good, and showed she was open to listening to the opinion of (investment) funds."

He provided no more details on Batakis's pledge.

The economy ministry did not immediately respond to a request for comment.

The investor meeting that Batakis addressed was mostly attended by representatives of international investment funds, as well as by U.S. banking-sector leaders.

"The funds see Batakis as a technocrat, and in that sense, they believe her more than (former Economy Minister Martin) Guzman," Timerman said.

The center-left Fernandez has faced division in his governing coalition, as more hard-line leftists led by Vice President Cristina Fernandez de Kirchner have at times advocated increasing spending to help cushion the blow of the present economic crisis on the poor and working class.