Argentina bonds fall on split between government and IMF 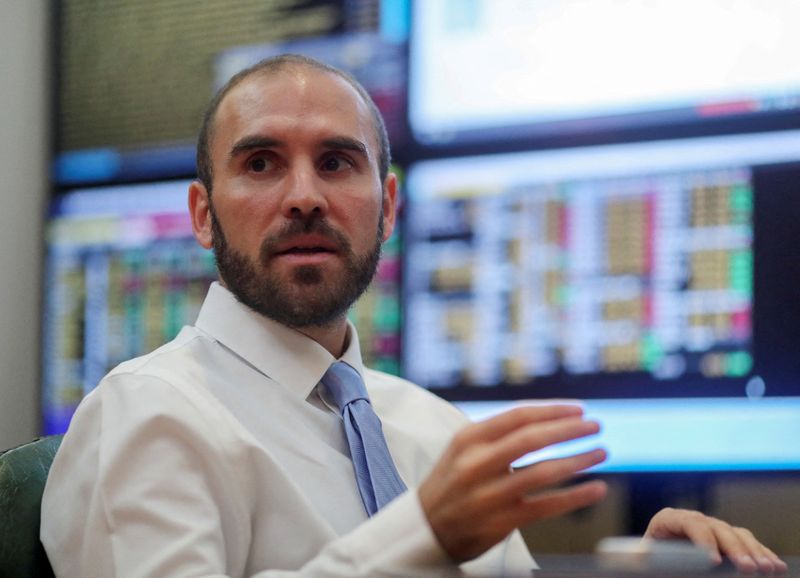 BUENOS AIRES (Reuters) - Argentina's sovereign bonds fell on Thursday after its economy minister said it would be difficult to reach agreement with the International Monetary Fund on refinancing the nation's $45 billion debt due to differences over its deficit.

The South American government and the multilateral organization are struggling to reach an agreement, Martín Guzmán told provincial governors on Wednesday, at the closing of the domestic financial market.

U.S. dollar-denominated Argentine bonds fell about 1 cent across the curve, with all issues trading between 30 cents and 36 cents on the dollar and yielding from 16.7% to 23.7%.

Analysts pointed to several reasons for the drop.

"Argentina does not agree with the IMF about the path to reducing its budget deficit. The government doesn't plan to reach fiscal balance until 2027," said professor and economist Santiago Bulat.

"In view of the important differences that remain to be bridged with the organization, and the search for internal political support to reinforce this position, the chances are growing of not reaching an agreement on a comprehensive economic plan in time given the large maturities," added economist Gustavo Ber.

Argentina faces $4 billion in debt payments to the IMF in the first quarter and $19 billion for the whole year, with a similar figure due in 2023, apart from planned repayments with private creditors and before the Paris Club.

A spokeswoman for Argentine President Alberto Fernandez said the IMF was calling for an adjustment policy that "compromises the Argentine people."

"We hope that it can be resolved as soon as possible," said spokeswoman Gabriela Cerruti. "Argentina is not going to default ."

Argentina recorded a primary deficit of 6.5% of GDP in 2020 due to a sharp increase in spending during the COVID-19 pandemic, and plans to lower it to 3.3% this year, after the economy began a process of recovery with growth of around 10% in 2021.