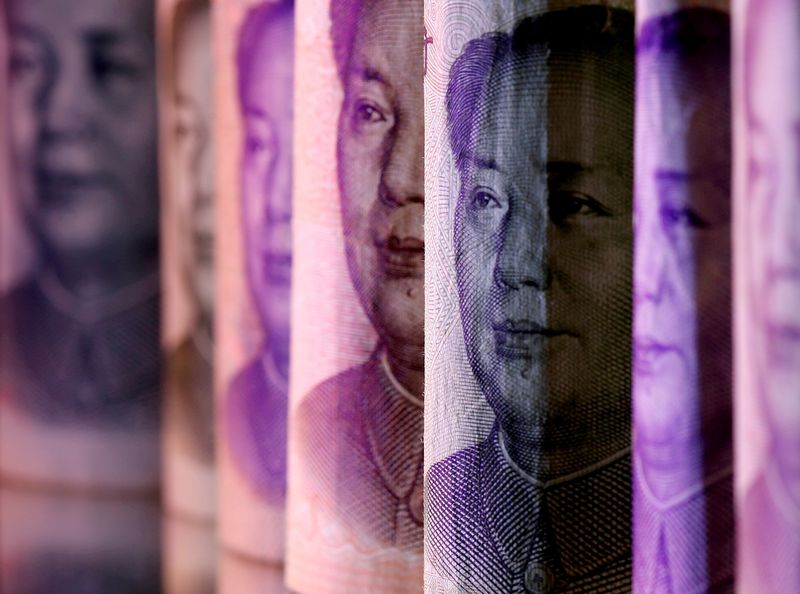 By Samuel Shen and Alun John

SHANGHAI/HONG KONG (Reuters) - This month's dive in China's currency has revived memories of past routs but market participants say increased foreign holdings of yuan assets mean authorities are much less likely to curb the selling than they were in previous years.

The yuan hit an 18-month low on Friday and has slid more than 4.5% on the dollar in April, setting it on course for its worst month since currency market reforms of 1994.

However, unlike 2018-19, when the yuan fell through the U.S.-China trade war, or 2015-16, when a domestic stampede to offshore assets accelerated a decline, investors and analysts say that foreign selling is now the dominant driver, presenting new downside risks.

Combined with increasing tailwinds for the U.S. dollar, these risks could lead to further yuan weakness with the People's Bank of China unable or less inclined to restrict global capital movement.

Foreign money is also a much more significant presence, with overseas investments in Chinese markets totalling just over 8 trillion yuan ($1.2 trillion) at the end of last year compared with roughly 1.5 trillion in 2015, according to the central bank.

"I don't think the renminbi is weakening because (authorities) want to support exports," said Alicia Garcia Herrero, Asia Pacific chief economist at Natixis, referring to the currency by its official name.

"I think the renminbi pressure is coming from investors leaving and a loss of confidence in the economy," she said.

Yet yuan falls have continued despite the PBOC cutting banks' foreign exchange reserve requirements this week, seen as a signal of support for the yuan.

China is easing monetary policy to support the economy through the biggest local outbreak since COVID-19 first emerged in Wuhan in late 2019, even as the U.S. central bank raises rates to fight inflation.

"What you see is the mirror image of yuan's strength in 2020, when China first recovered from the pandemic at a time the U.S. was pumping liquidity," said Yuan Yuwei, a hedge fund manager at Water Wisdom Asset Management.

Amid the tumble, global banks have hurried to downgrade their 2022 yuan projections.

Standard Chartered (OTC:SCBFF) thinks persistent capital outflows can drive the currency down further to 6.7 per dollar by the end of June.

A Reuters poll and official data suggest households are not rushing to buy dollars, giving foreign investors, who hold 8 trillion in yuan-denominated bonds and stocks, a bigger role in cross-border flows.

For their part, local investors have other concerns.

In 2015, "many Chinese went to Hong Kong to buy insurance as a way of moving money out. Now, you cannot go to Hong Kong that easily, because of COVID," said Xia Chun, chief economist at Chinese wealth manager Yintech Investment Holdings.

China's challenge now is to "persuade long-term global money to stay. Once such investors decide to leave, they don't come back easily."

That could be difficult as global sentiment sours.

China weights in emerging market portfolios are already dropping, falling from a peak of 38.3% in late 2020 to 29% currently, largely due to the fallout of Beijing's tech crackdown, according to COPLEY Fund Research.

Following Western sanctions against Russia, "we think that managers are re-pricing the risks associated with holding such a large allocation in China stocks," given Beijing's friendship with Moscow, founder Steven Holden said.

To be sure, China's economy is growing and even this month's tumble has only pulled the yuan back to the middle of a range it has kept on the dollar since 2016.

While the yuan also remains very strong in trade-weighted terms, most think it will struggle to find a floor without firmer central bank guidance.

"The absence of dollar unloading in the past week is not because corporates are short of dollars to sell, but that they have shifted to a wait-and-see mode given the unanchoring of FX expectations," J.P. Morgan analysts said in a note.

"This leaves CNY trapped in a negative feedback loop, at least in the near term, of worsening expectations and the delay in counter-cyclical dollar selling from corporates."